First a little explanation of where I've been these last few days. I haven't forgotten you and did get a fair amount of gardening done - asparagus, peppers and tomatoes planted plus a lot of weeding. We were in the midst of trying to decide if we should finally get rid of our 15 year old car and get a new/used one. After a number of test drives and talks with our banker about loan rates, we ended up with a Toyota Yaris. It may take a bit of getting used to such a small car after driving an SUV for all these years, but we both pretty much fell in love with it (and its tiny pricetag and good gas mileage) right away. Enough about that - on to gardening.
This morning I thought I'd do Yuccas since they are going to be blooming soon. No scapes yet, but any day now. I first encountered yuccas in person on my farm in West Virginia. I had seen them in books, but never knew any one who grew them. Guess they weren't big in Philadelphia. I guess I always assumed they were hot desert things. I couldn't have been more wrong. Though some of them really prefer a sandy soil, a number of them will grow in a sunny (or even not all that sunny) spot in just plain old average garden soil.
This first one is Yucca filamentosa 'Color Guard' and has a green leaf with a narrow yellow edge. All of the Yuccas spread by underground runners and you will get a clump eventually, though not right away. They like to settle in first. Most all will have a tall bloomscape with creamy white flowers. 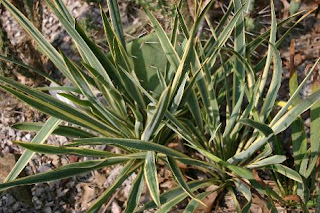 This next one is Yucca filamentosa 'Golden Sword'. It is the reverse coloring of the last one, yellow with a green edge. 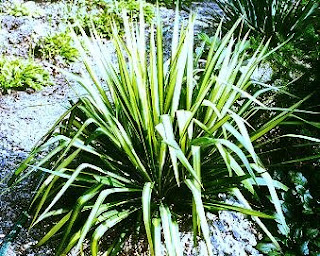 This one, Yucca linearifolia, is one that seems to like growing in a desert-like spot and is at the edge of the large cactus bed. As its name implies, it has quite linear - and skinny linear - leaves.
It is a bit more fussy than the filamentosas, but still not a hard thing to grow. Most of these, not counting the bloomscapes, are about 18 inches to 2 feet tall. 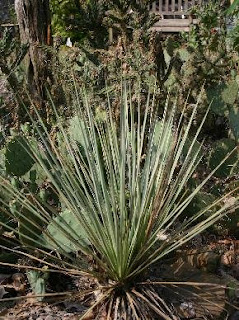 This is the one I call the friendly yucca. It is Yucca flacida 'Ivory'. As it's name implies, its leaves are soft, almost droopy sometimes. Very un-yucca-like. Some of the other varieties are very sharp on the tips of the leaves and can be unpleasant to weed around. Not quite like a cactus, but still pointy. 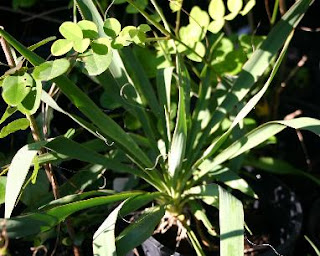 Last but not least, it good old Yucca filamentosa, the common one found on old farmsteads, or where farms used to be, and about as dependable as they come. I have them growing in sun and shade and they bloom equally well in both spots. The bloomscapes on these are sometimes 5 feet tall and covered with large, bell-shaped white flowers. Just the thing to add a tropical look to a very un-tropical garden. 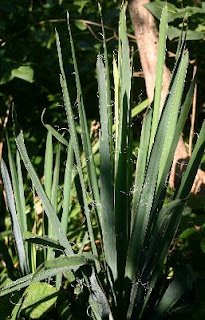 Hopefully I'm back on schedule now with no major distractions to keep me from writing.
Jane

Posted by Hoot Owl Hollow Nursery at 6:58 AM