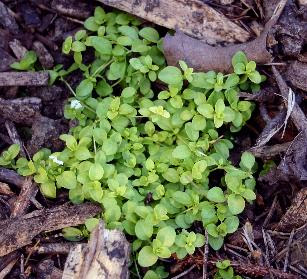 As promised, more on Veronica. The one above is called 'Sunshine' and has yellow leaves, at least when it is in enough sun. It has not done quite as well here as the 'Georgia Blue' that I posted about yesterday which is extremely dependable. Not enough sun and this one not only loses its yellow color and fades to green, it might just fade away all together. It also seems to be more prone to damage by slugs.
The next on is one of my favorite Veronicas, 'Sunny Border Blue'. I have it growing in full sun and part shade and it seems to do equally well in both spots. It is probably about 18 inches tall, though sometimes it needs a bit of staking to keep it tall and not sort of leaning. The blue flowers are a darker color than the 'Georgia Blue' and are spikes instead of little tiny flowers. It blooms from mid-summer till frost. I have also found this one to be a good cut flower. 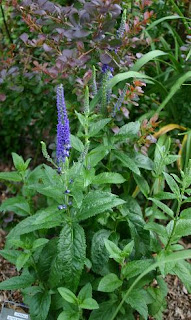 This last picture is another of the really dependable Veronicas, 'Giles van Hees'. This one is much shorter, the foliage not over about 3 or 4 inches tall and the spikes, maybe up to 8 inches and a lovely shade of pink. It also blooms pretty much all summer and until frost and has come back in the 3 or 4 places I grow it for at least the last 6 years, making a large clump each year. These flowers, too, are good in an arrangement, though in this case it needs to be a miniature arrangement in a tiny vase. 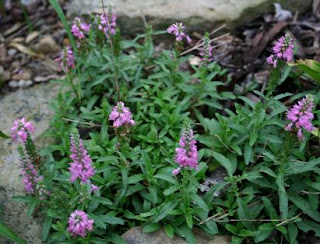 In addition to these, Veronicas come in a wide range of colors including white, blues, pinks and purples. The common name is Speedwell, though I've just always known them as Veronicas.
They are easy to grow either by division or from seed. In any of its forms, Veronica is a great addition to any garden from the rock garden to the front of the border to the back.
I think I'll stick with perennials for this week (some less common, more unusual ones, hopefully) since they are just starting to bloom and then maybe do some posts to show off the peonies which should be ready for some pictures the week after.
Jane

Jane .. I have a few veronica .. one such a pale steely ? blue it is amazing .. and one with the fury silver foliage that can take heat and drought VERY well .. so many different types in this category of plant make it interesting indeed : )

I love your posts. Now I'm going to have to go look for some Veronica!! Keep going with perennials--I never can learn them all. Half the time I plant something, and don't know what it looks like coming out of the ground the next year!! Guess what happens then?