Edible Landscaping was the name of a book I had at one time, though I don't see it on the shelf now. I must have passed it along to someone else. The premise was that you don't always need a separate garden for your vegetables since plenty of them are just as ornamental as the flowers. Herbs are the most common example, but since I had so much trouble with deer and other critters getting into my vegatable garden when I had it across the road, I decided to try and incorporate all of my veggies into the gardens around the house rather than just the thyme, parsley, sage and basil. Plenty of sun on this side of the road too.
This first picture is of the small fenced off are where I have planted 8 broccoli plants and 8 cabbage plants. They're back behind other plants. I had to work a bit to even get a good picture where you could see them, and even in this one they aren't all that visible. There is also a row of beets and one of carrots between the others. Broccoli will be ready soon and the cabbages are starting to head. Although I much prefer a pretty garden with nice neat rows of lots of things, this will have to do for this year. 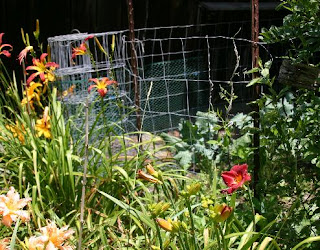 This next one is my cucumber patch, where they seem to be much larger every time I look. Just about to flower and make me some cucumbers that I will turn into bread and butter pickles. The whole patch is about 6 feet by 10 feet. Plenty of space for a lot of pickles to grow. I have a short fence around it and netting over the top, rigged up sort of like a circus tent. The baby groundhogs aren't going to get these. Tomatoes are actually kind of easy to do since you can put one plant (and a fence) in a pretty small space. With this green fencing, it blends in very nicely with the other plants. You really have to look to see it sometimes. I have 6 - 3 Rutgers for Hank and 3 Beefsteak for me. There are green tomatoes on the Rutgers, so not too much longer to wait. These are pretty much for fresh eating. I'll get the quantity I need for canning from the farmers' market. 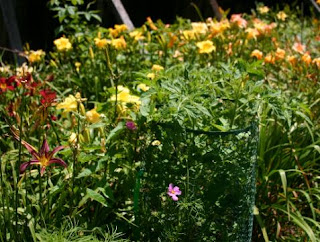 And if you can't find a place amongst the perennials, just grow your veggies in pots. My peppers just didn't seem to have a good place to go, so I put them in gallon pots, and already have a pepper growing. 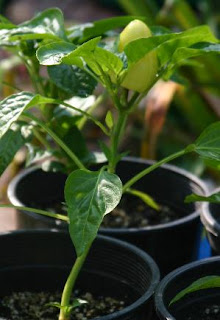 There are also plenty of 'grow them on the patio' types of containers for vegetables, so unless you live in a closet, you really don't have any excuse for not having a fresh tomato or 2 this summer that you grow yourself.

Posted by Hoot Owl Hollow Nursery at 10:08 PM No comments: 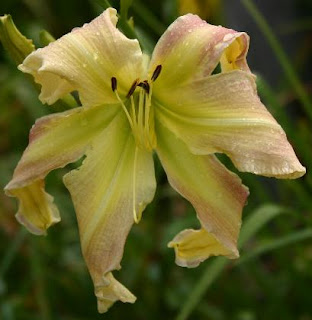 I guess it's about time for me to write something. I plan posts while I'm weeding and planting and pruning, but by the time I'm done working for the day and have supper, I'm usually too tired to think about actually writing something down.
Things have been really busy around here. We have repaired the pond where the miniature water lilies grow to fix the problem caused by a deer falling into it last winter. We have also been waging a war on bamboo and have totally eradicated the knee-high one from the bed in front of the front barn. It is now planted in hostas and some other shade plants and, if I do say so myself, if much better looking that way. We also got rid of the yellow striped small bamboo on the way into the sales area and that too is not in hostas, but mostly miniatures. The same yellow striped bamboo that was growing along the driveway as you walk in has also been removed and replaced with nothing. It was just growing through everything and didn't need to be there. This small stuff is much easier to get rid of than the tall. You simply have to dig it out. The roots and runners are small enough that although it is a lot of work, it is possible. The tall stuff is still a problem and we will be trying to get rid of some more of that. It would take shovels much sturdier than we have and a much stronger person to dig any of that out.
The other war is on vinca and ivy. It is totally (hopefully) gone from several beds that have been redone this spring. I have a bit more to do, but progress is definitely being made. We've always made some changes in the gardens every year, but this year is major redecorating time. It's kind of nice - gives one new gardens to enjoy without having to expand the gardens and have more to take care of, which at my age I don't really need. Daylilies growing in too much shade have been moved to happier places; hostas in too much sun are in the process of being moved.
Wish I could remember all of this things I had wanted to write about. We do have a family of raccoons who come by each evening. The one with the half-a-tail shows up a 9 o'clock exactly every night to clean up the seeds that are dropped under the bird feeders. He also did us a favor by totally destroying/eating a yellow jacket nest.
I do need to mention that the daylilies are glorious right now. This may be the best weekend of the year to see the largest number in bloom at once. We have had some in bloom since April and will have some almost up until frost. The deer, for the first time in a few years, have done some nipping of buds on them, but Milorganite and Liquid Fence have pretty much stopped it. There are a few bare spots with no bloom, but others are in their full blooming glory. Sunny days today and tomorrow, so you have no excuse to not come and see them.
We added a Blue Atlas Cedar to the back gardens yesterday. It wasn't planned, but when we stopped into Lowe's for some caulk, and of course had to see what we could rescue from their garden center, there was this 6 foot tall Cedar, just begging for us to take it home. It barely fit in our little Toyota Yaris, but it is now planted. Now we just have to keep it alive. They are only marginally hardy here, and although we had one live here for a number of years, they can be tricky. We have tried a new siting and hope this will keep it happy. It has become the centerpiece for what will be a blue garden. Hank says blue and gold, I say blue and white. He gets up earlier, so I expect it will probably be blue and gold.
So, enough for now. If there are any plants of topics anyone has questions about, please leave a comment. Sometimes I just need some inspiration for get writing again.
Jane
Posted by Hoot Owl Hollow Nursery at 6:30 AM No comments: