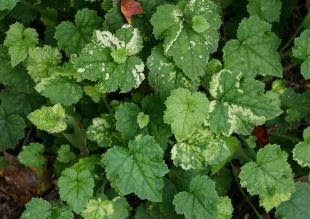 Something different this morning. I always knew this plant as a house plant, piggy-back plant we called it. I had no idea that there was an outdoor version (maybe it's the same plant, not sure about that), that would be hardy here. I have also taken babies of this one inside where they did quite well. It is a small, mounded perennial. Not sure about bloom since I don't remember it blooming, but is makes new plants but growing a new leaf right at the base of, and on top of an existing leaf. You can see a baby just left of center near the top. This one is a gold/variegated version, but the all green one does the same thing. The new leaf will start to grow roots after a time and you can either separate it from the parent, or if it's an outside leaf, pin it down to the soil until it is established and then separate it. The leaves are about the size of a Tiarella, so it's not a big thing. It stays evergreen here in zone 6 on a mild winter, but lately we've had pretty cold temperatures and it has disappeared, to return in the spring. I've not seen it in catalogs recently, but I'm sure someone is still selling it. Plants are very 'faddish' sorts of things, with some being popular and then dropping off while new things take their places. Nothing to do with their being worth garden plants, just fashion as much as short skirts or the newest colors. That's the advantage of having such a large garden; I don't have to get rid of the old to make room for the new. I always have plenty of room.
Jane

Posted by Hoot Owl Hollow Nursery at 7:09 AM

You are so lucky, never run out of gardening space!

Having all of this space is both a blessing and a curse. We live on 108 acres and the older I get the more I wonder just how much I should expand since I have to maintain all of these gardens once I create them.
Jane