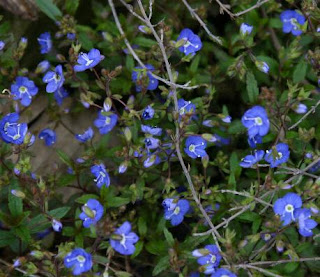 Veronica's come in so many shapes and sizes and I was always told that they were difficult to grow. This one proves all of that wrong. It is a ground cover that thrives in full sun and doesn't even seem to mind drought too much, though I expect that even this one has its limits. It has dark green leaves and flowers of that shade of blue that seems to be electrified. The flowers are not even a quarter of an inch across, but what they lack in size they make up for in sheer numbers, totally covering the plant. It has its biggest bloom in the late spring, but will bloom sporadically during the whole growing season. It makes a low mat without ever bothering its neighbors. I'll do a more comprehensive post on the Veronicas tomorrow.
Today's project, in addition to hopefully selling some plants, it to dig my new asparagus bed. I'm actually looking forward to it, maybe not so much for the digging, but for the eventual eating.
Jane
Posted by Hoot Owl Hollow Nursery at 7:15 AM

Hello Jane : )
I have this one and it is amazing to see those beautiful blue flowers thrive in rather tough conditions .. great over all plant in the garden !