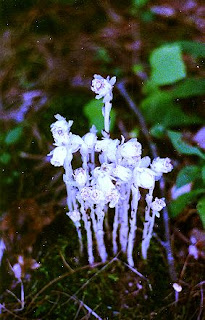 Something that grows in my garden but that I didn't plant. Despite that, it has been one of my favorite plants since I first saw them growing in the woods when I was a little girl. The common name is Indian Pipes, or the decidedly less lovely Ghost Plant, and they appear June to September. I expect this to be a good year for them since it has been damp. It is a perennial, not a fungus like you might think from its appearance, but it has no chloryphyll and instead is parasitic, getting its nourishment from the trees upon whose roots it attaches itself. It is virtually impossible to transplant into ones garden because of its parasitic nature. Sometimes is has a pinkish color, but usually is all white. They are small, only about 4 - 10 inches tall, but they are rarely overlooked since nothing else in the woods looks quite like them.
We may have had frost last night, but I haven't been outside to check on things yet. My thermometer says 33 and that's not a good thing.
Jane
Posted by Hoot Owl Hollow Nursery at 7:13 AM