Before I get to the picture for the day, just a little reflection on something I heard last night - a Whippoorwill. I have always loved listening to them. Their call at twilight is both mournful and comforting. When we lived on the farm in West Virginia, my late husband and I used to sit on the porch most nights in the nice weather at dusk and just enjoy the sights and sounds of the approaching night. There was always a Whippoorwill who called from somewhere on the hill near the house. It was just a part of the fabric of early summer evenings. When I married Hank and moved to the farm here in Ohio, I was thrilled to find that we also had a resident Whippoorwill. There never seem to be a bunch of them, just one calling in the night. This one was not as relaxing as our friend in West Virginia had been since it seemed to be calling from just on the other side of my daughter's bedroom window. Really loud. After a few years it disappeared and another one did not appear to replace it. I missed the sound at dusk. Only frogs were calling. Then a few days ago, there it was, a Whippoorwill. It just brought back a flood of happy memories, of people no longer with us and children off on their own journeys now. I hope he/she likes it here and stays. Summer is not quite the same without them. 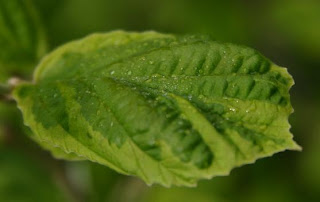 Here is a picture I have been waiting to take for a month or more. This is the leaf from Hamamelis 'Double Gold'. I had taken a picture of the bloom when we first got the plant earlier in the season, but the yellow flowers weren't why we bought this one. Here is a picture of the leaves, the first variegated witch hazel that we have in the gardens. I think it is going to be a nice addition.
Jane
Posted by Hoot Owl Hollow Nursery at 7:13 AM

I too love the sounds of the evening .. we are not fortunate enough to live in the country for true evening melodies from the birds and frogs and crickets ? .. but sometimes we can have a little peace and quiet and enjoy the birds we do have around the garden .. funny how impacting those beautiful sounds are : )