#1 is Polygonatum hybridum 'Striatum', a Solomon Seal. I thought this was unusual since the ones I have scattered everywhere, a more common edged/striped one, comes up looking like asparagus. 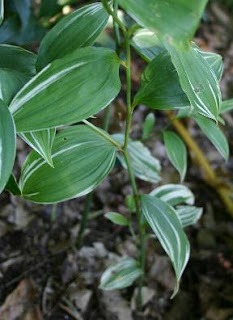 #2 is Polystichum acrostichoides, Christmas Fern. That one was pretty easy. 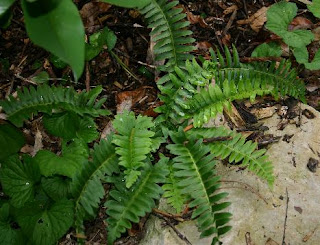 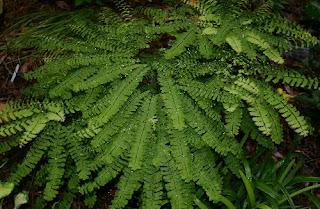 #4 I don't seem to have a picture of when it matures, but it is Meadow Horsetail, another version of the more commonly known large one. I'll try and get pictures of the 3 that we grow and do a post on them sometime soon.
#5 Is on of the lilies, I think it is Lilium regale, but can't be quite sure on that. They look pretty much the same, or some version of this when they come up. 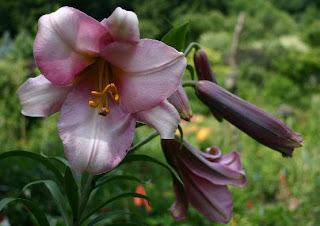 #6 Polygonatum x hybridum 'Grace Baker'. Now I didn't really expect anyone to get this one, but it was just so interesting I included it. This is a smaller polygonatum, only about a foot tall that grows in deep shade here and has a very streaky variegation. 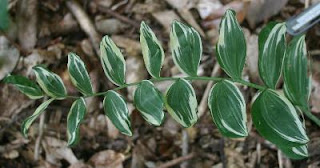 #7 Hosta 'White Wall Tire'. I can't imagine why I don't have a more mature picture of this one. It starts out all white and then as the weeks go on, develops green veins, slowly becoming a light green all over. Quite robust for something with so much white in the leaf. It can take quite a bit of sun. 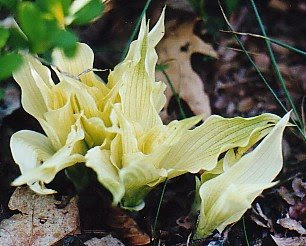 #8 Tradescantia 'Sweet Kate'. Another one without a good 'grown-up' pictures. This is a lovely spiderwort that has gold leaves and purple flowers. It will self seed, but more of my seedlings seem to come true. If you have parts that revert to green, they need to be removed because the green parts will be more robust and take over the plant. 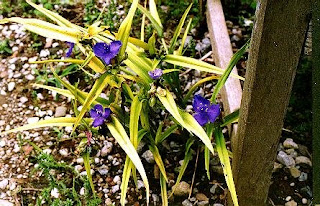 #9 Polygonum japonicum 'Tricolor'. This is a lovely buckwheat, sometimes called Mexican Bamboo, though I've only seen that name in catalogs; never actually knew someone who called it that. We grow two variegated versions of Polygonum, this one being the larger, probably getting 6 feet tall. It has a splashed white and pink variegation with some green. The other one is less red coming up, more like a whitish/pink asparagus and has a white and green splashed variegation. 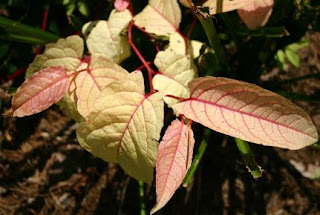 #10 Last but not least, is one I thought I had a picture of - no I'm sure I had a picture of - but can't find one now. Actually I can't find pictures of any of the arisaemas, which is what this is. Arisaema griffithii. Don't hold me to that spelling. It's as hard to say as it is to spell. It is a large Jack-in-the-Pulpit which leaves at least a foot across and dark green and black spathes. Not somthing you'd overlook when walking around the garden. I'll try and get a picture of this one today if it's all opened up. This rain is rushing things along, so there's a chance it's ready for its portrait.
I'll check over the answers I received and announce the winner tomorrow.
Jane
Posted by Hoot Owl Hollow Nursery at 7:16 AM