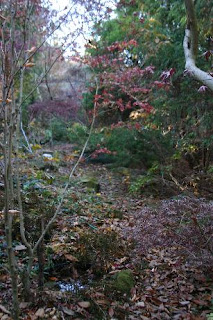 As promised, here are a couple of pictures of the garden I featured yesterday as it looks now. It was really hard to get these photos as the garden is so grown up and filled it was hard to find a good place to stand where I could get enough in to show everything. I gave up and settled for what I could get. This is the path looking south to north (if you want to compare it to the other one). The path is pretty much covered with leaves and the maples are bare since the leaves are on the ground. It is sometimes difficult to walk on the path because some of the low growing conifer wants to grow across the path. Other of the conifer are now bare at the bottom since they've grown quite tall and what used to seem like a private room, is now more like a room with a picture window where you can see into other parts of the yard. I don't think I expected that when things were originally planted. I'm starting to like it and the high shade it provides. 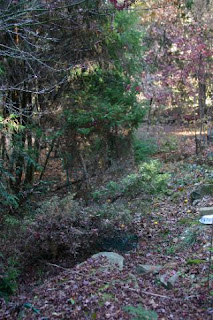 This is the same path looking north to south where you can see better, on the left side of the picture, the low growing conifer and the trunks of those that are taller. 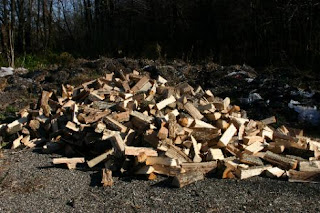 And here is the reason I didn't get this posted last night before I fell asleep. Before ... 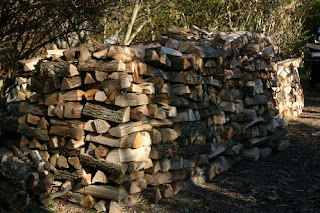 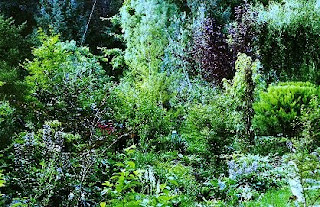 This is another section of the gardens as it looked recently ... 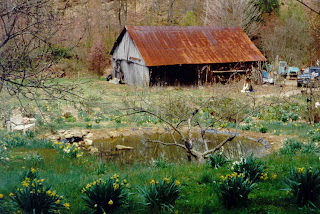 And as it was in 1995 when the pond liner was first put in. I had even forgotten just how empty the area was then. The indentation in the hill had been a watering hole for the cattle that lived here for many years when this was a working dairy farm. It is spring fed, but dried up in the summer. By lining it, we can keep it filled even in summer and it provides a place for waterlilies, lotus and some unusual cattails and iris.
So, if you live in a place long enough, and you have a good memory or old photos, you can see just how your garden evolves. There are always little changes year to year as I plant new things and other things grow. And there are the seasonal changes from a winter garden dominated by conifer to a spring one awash in daffodils, to summer with large swaths of daylilies and fall with the wonderful colors. Each season has its own personality and I love them all. I guess that's why I'm a gardener.


Posted by Hoot Owl Hollow Nursery at 6:54 AM No comments:

Change in the Garden 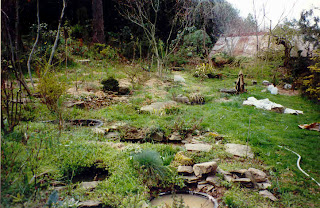 After writing about un-gardening last time, I've been thinking about how gardens change. We have a smallish garden to the west of the house which we have always called the Japanese Garden. In all, it's probably about 50 by 75 feet. At first it looked like the picture above - rocks, small ponds, a few trees and lots of sun. This picture was taken in 1995. 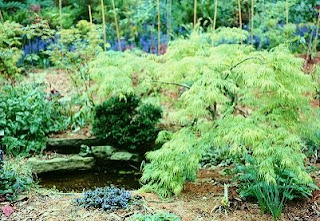 This is a year of 2 later of the center pond and its maple tree. 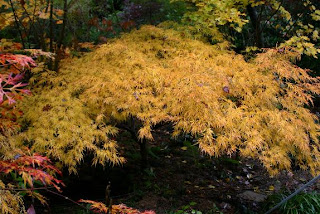 And this is the same maple tree now. It would be a lot bigger, but we've spent a lot of time shaping it and pruning it to keep it in scale with the garden. 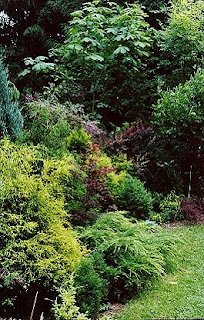 Looking north to south, there is a nice grass path and various conifer. This was about 1998. 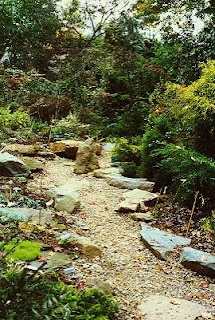 By 1999 the grass is gone and we have added a gravel path and lots of rocks. This is the view looking south to north. 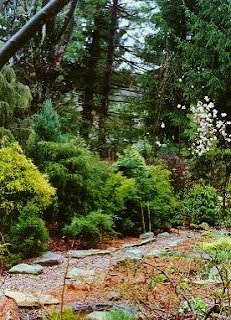 And the same view looking north to south. 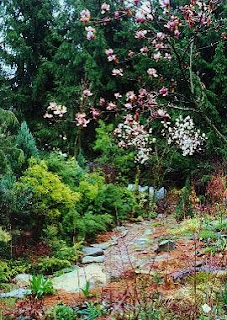 In another year, things have grown and the magnolias are flowering better.
If I had planned better, I'd have a bunch of current photos, but I decided to write this at about 10:30 PM and it's a bit dark for garden photography at the moment, so I'll make this a 2 parter and finish up tomorrow. I can tell you that the garden is now too shady for a lot of the things that were there originally. The low growing conifer aren't so low growing any more and most have matured nicely. Those that haven't have been transplated or just cut down. It is now home to hostas, ferns, gingers, mosses, woodland peonies, hellebores and a host of other things. No longer happy there are the pitcher plants, creeping willows (though the bunnies had something to do with that), the Franklinia and a small waterlily. In addition to the conifer, the garden is dominated by a couple of large magnolias and lots of Japanese Maples. As you reach the back of the garden, going up the hill, in addition to the conifer, there are 2 ancient and very tall pines that were here before we bought the place, some rhododendrons and a couple of Witchhazels. So, tomorrow, I'll post some current pictures, though it may be hard to get good ones, the garden having grown up as much as it has. Just wish I had thought of doing this before the peak of fall bloom had passed for the maples.
Jane

Posted by Hoot Owl Hollow Nursery at 10:24 PM No comments: