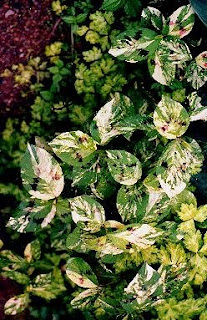 In case you didn't notice, I tend to like variegated plants. These two photos are of Tovara virginiana, the top one is 'Painter's Palette' and the bottom one is just called 'Variegata'. I think there are too many variegatas, which makes guessing at the name easy, but as one who likes unique and creative names, I find it not all that satisfactory. Both of these prefer dappled shade or maybe morning sun. They are not picky about much else; just give them good garden soil and enough moisture and they will grow in your garden. They don't seem happy in full sun. I do have some that grow there, but not because I planted them, these self sow and give you small colonies where the original plant was and occasional surprises in other places in the garden. They don't do this to the point of being invasive, but expect more of both of these if you have one in the garden. 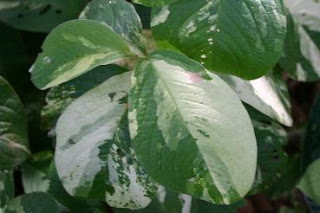 This last one is listed as Persicaria 'Lance Corporal' though it is related to the others and I'm not sure what they're decided on for the official name - Persicaria or Tovara. I've seen all of them listed under either name. This has the chevron like 'Painter's Palette'. It seems to take a little more sun, but I keep it in a shady spot and keep in confined to just a couple of plants because this one, unlike the others, is invasive, extremely so, and I had a rather large patch of it before I realized it was just a bit too much. It is a pretty plant, though, and I won't get rid of it all together. The leaf color can vary from green through chartreuse, to almost gold, depending on the light conditions. 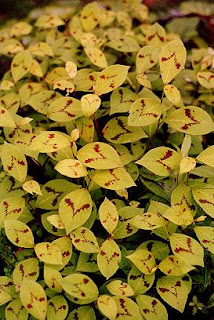 All of these bloom in the fall and have a slender bloom scape which rises above the plant and has red flowers, pinhead sized, which run along the scape. Quite unusual and pretty. Tomorrow I'll do the other Persicarias, which I tend to call Persicarias (rather than Tovaras) and keep separate (at least in my head) from these because they have a different flower.
Jane

Posted by Hoot Owl Hollow Nursery at 6:37 AM

I also like variegated plants as the leaves add some extra interest to the landscape.

So happy to find a description of painters palette. Ihave been giving them to friends who all seem to truly enjoy them. I try to eliminate the dark leaved ones. I have several that have reached 31/2 feet tall. Lovely plant, brightens the shade beds beautifully! Thanks Diane, Mi.