I think all gardeners have special plants - ones that bring back memories of childhood, family and friends or special places.  Scilla is one of those for me.  We had them growing, a small patch of them, between 2 Azaleas in the front of the house.  They were tiny things, not flashy or showy and likely to be overlooked by most people, but as a small child, they were right down there where I was and I loved the color, such a deep, clear blue.  I now have lots of them spread throughout the garden.  They come up early and don't last all that long, but while they are here, they are just so pretty.  Since I've not been adding much cultural information to these posts lately, I decided I'd check on the zone for this one (2-8) and found out that it is considered invasive in some places.  Originally from Russian and Eurasia, it has been grown here in the U.S. since the late 1700s.  Grow them in part sun and a place with good drainage.  I like them in masses as they are so tiny, one or two in a place are likely to be unnoticed.  Bees seem to love them and in the very early spring, I'm sure it is a relief for the bees to find something, anything blooming.  They spread by seed and the short, only about 6 inches tall, if that much, is gone by early summer.  Hostas come up around most of ours, so I don't really know for sure when the foliage is gone .  If you aren't growing them, I would recommend them.  They are one of the cheaper bulbs, so you can buy a whole bag of them and spread them around the garden. 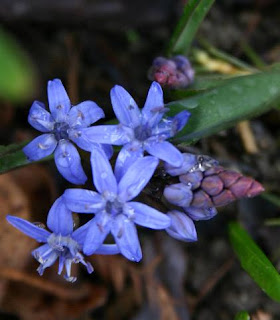 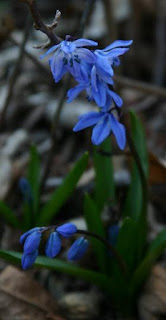 And there is a pink form which I also grow, but it will never have the place in my heart that the blue ones have. 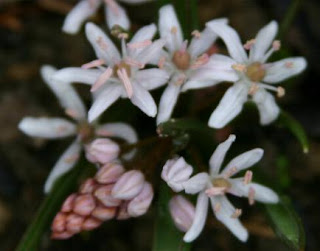 Posted by Hoot Owl Hollow Nursery at 5:58 AM

Blue flowers are my favorite