The snow is still here, though not so much in town, as we found out this morning.  Still ice on some paths, but it is certainly melting and it is once again safe to walk and enjoy the garden. That means new photos of the progression from winter to spring, though probably temporary progression as more cold weather is predicted after our nice warm spell.

As you can see, the creek, though still frozen, is starting to run nicely again.  At least visibly nicely.  It was running all along under the ice.  Very cold water right now. 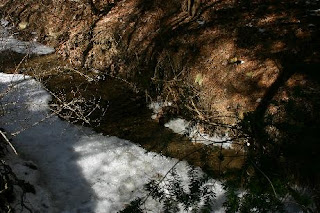 Another spot on the creek with very fast water.  Tiny creek with rapids. 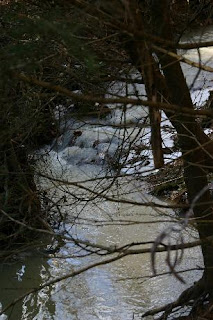 Shady spots still have a lot of snow.  This ivy doesn't seem bothered by it, though. 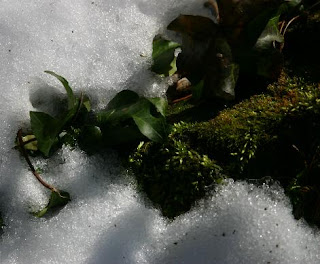 Lake Amanda, the large pond in one of our shady gardens looks like it has ice bergs floating right now.  Too late to save the yew foliage as the deer took care of it while the pond was still frozen and they could just walk out and get to it. 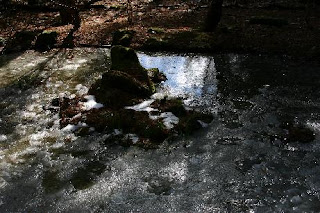 On of the pots of iris that grow in Lake Amanda.  I think they're in a bit too much of a hurry. 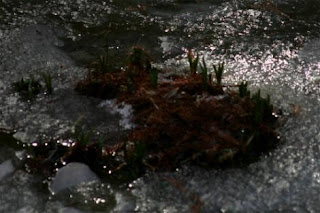 And you can't forget the Snowdrops. Tiny buds are showing already. 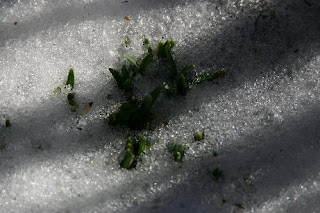 The Tibetan Hellebores are also in a bit of a hurry.  No snow on them as they have been covered by an insulated box to protect them.  They are just in too much of a hurry this year.  They are always early, the first ones to bloom, but this is just a bit much.  They will be covered again when the cold returns. 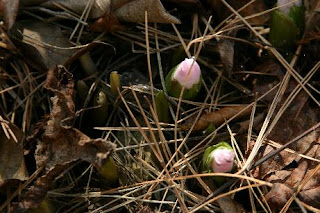 Posted by Hoot Owl Hollow Nursery at 9:18 AM