I guess I'm in my winter lazy time. Really cold here today despite gorgeous blue skies and abundant sunshine. It shouldn't be allowed to be this cold when it looks so nice outside. I expect it to be close to zero tonight.

I thought I'd divide the Japanese Maples into 2 groups; today the dissectums - those with very lacy, divided leaves. Some of these are hard to photograph as their leaves are so lacy. I hope you can get a good idea of what they look like anyway. I find them quite beautiful and not nearly so delicate as they look.
Japanese Maples, in general, are hardy down to zone 6. Colder than that and they may not survive the winter. I always recommend the species maples, those on their own roots as opposed to the grafted types for those in colder zones, so that if you do get die-back, the plant has a chance to regrow in the spring from the roots which will probably survive.

This first picture is of 'Garnet'. It's not a new cultivar and is quite dependable. When grown in too much shade, it might get a bit of green in the leaves, so be sure it gets some sun. It was originated in the Netherlands. 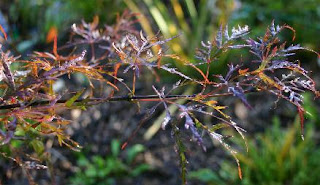 Our next photo is of 'Goshiki shidare'. The leaves are usually a deep green with red overtones. The color can be quite variable and is somewhat dependent on the amount of sun. 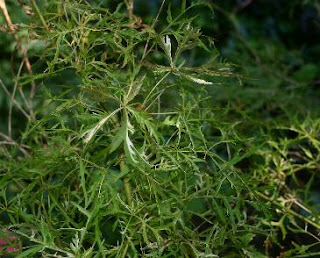 And this is the new spring growth on 'Goshiki Shidare'. It's a shame it doesn't last longer. 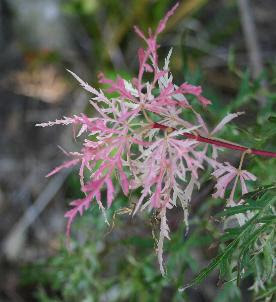 One of our more lacy cultivars is this 'Red Dragon'. Anything lacier than this, I don't have a picture of because the leaves just sort of disappear into the background. 'Red Filagree Lace' would be one of those. They show up fine in person, but photographs are just plain difficult. Even this one is kind of hard to see. 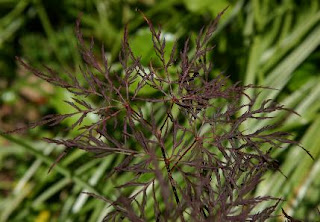 Acer palmatum dissectum 'Seiryu' is rather unusual in that it is an upright form. Most all of the others are rather weeping in shape. The leaves are a bright green and the fall color is a mix of yellows, oranges, reds and any shade in between. Ours grows in quite dense shade. This cultivar is slow growing, maybe reaching 12 feet tall in 20 years. 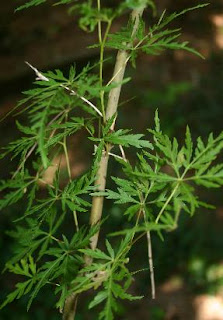 And the spring color on Seriyu is almost as nice as the fall color. 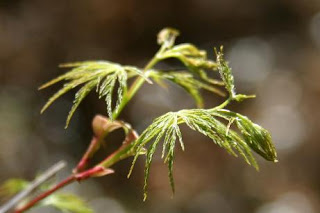 So this is just a sampling of the dissectums. Next time I'll share just a few of my favorites among the 50 or so Japanese Maples that grow here in our gardens.
Stay warm.
Jane


Posted by Hoot Owl Hollow Nursery at 6:20 PM No comments: 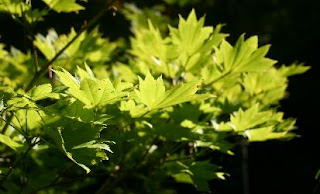 Acer shirasawanum is one of my favorite maples. Although I love the lacy and delicate leaves on some of the Japanese Maples, there is something about these wide leaves that I find attractive. The species (above) has leaves that are a light green, maybe almost chartreuse. Very, very old trees might get to be 50 feet tall, but this is rare in cultivated trees. My tallest one, planted 15 or 18 years ago, is barely more than 12 feet tall. It is native to central and southern Honshu and Shikoku in Japan.
The photo below is Acer shirasawanum aureum. It may sometimes be found with the name 'Ogon', which just means yellow. The spring foliage is pale yellow green and as the season progresses, it tends to green up a little, though it holds its color better in shade. Its fall colors are spectacular ranging from yellow through orange and red with even some purples showing up on some leaves. It is an extremely slow growing tree 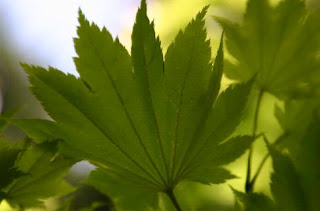 Acer shirasawanum 'Autumn Moon' is a medium sized tree with unusual colored foliage. The color can be pink to orangey red. More sun gives better colors. The original plant was a seedling off of 'Aureum'. Fall color is just an intense version - very intense - of the regular color. 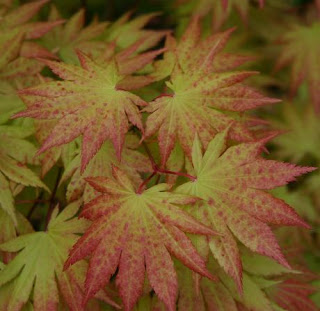 Acer shirasawanum ezono momiji . I've also seen this listed as an Acer japonicum, but I'll go with the shirasawanum since the leaves are much more like one of those with the 9-11 lobes and the indentations between the lobes, not all that far divided. Originally the shirasawanums were included as a subgroup in the japonicums, so maybe that's where the confusion comes in. Although it is pretty much just green most of the year, the fall color blends reds and oranges and yellows. 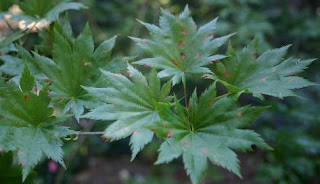 Acer shirasawanum palmatifolium is about the same color of the species, but with much more divided leaves, looking more like one of the Japanese maples. It can take a bit more sun than the others ... 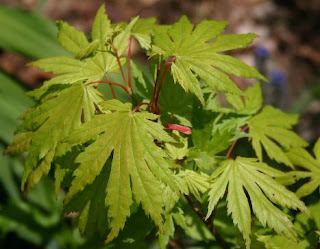 ... and the fall colors are just wonderful. 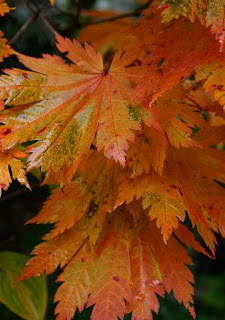 These all grow in zones 5-9, like full sun to light shade (more shade in hotter climates). It doesn't like windy spots, so a bit of protection is appreciated. It likes moist but well-drained soil. Ours don't seem to have insect or disease problems, but you might be troubled by scale insects, caterpillars, aphids or leaf spot if those things are a problem in your garden.
Now on the the true japanese maples. These will take a few days because we grow so many of them.
Jane

Posted by Hoot Owl Hollow Nursery at 7:06 PM No comments:

First, let me go off track a bit before I even get to the maples. As any of my long time readers know, I'm not the most disciplined person when it comes to regular blogging. I think about blogging a lot and work on new posts in my head, but actually getting around to sitting down and writing doesn't always happen. The past week or so, sitting at the computer hasn't been the problem. I've been on it 10 or 12 hours a day doing my semi-annual update and re-do of the genealogy site for which I'm webmaster(webmistress?). If anyone is interested in the genealogy of Chester County Pennsylvania, feel free to check it out. There is more work to do, but I need to do something else for awhile. Should you want to check it out, it can be found at
http://chester.pa-roots.com/
Now on to the maples for today. Acer pseudoplatanus - Sycamore Maple. It is native to central Europe and southwestern Asia. The species is a tall deciduous tree, though as for most variegated things, these will probably mature at a smaller size. At any rate, they seem to be very slow growing here - and very difficult to establish. The species is noted for being tolerant of wind, city smog and salt spray, but I expect that fussy ones we grow don't tolerate as much.

This first one is Acer pseudoplatanus leopoldii. Like the species, the mature leaves are kind of thick and leathery, but unlike the species, they are nicely variegated. This one like the others is good down to zone 5. It was named for King Leopold of Belgium in the late 1800s. In the Pacific Northwest, I think they can grow these in sun, but here it needs light to medium shade. 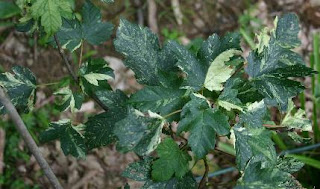 And like most of this group, the spring color is even more distinctive than that of the mature leaves. Fall color, too, will be worth checking out. 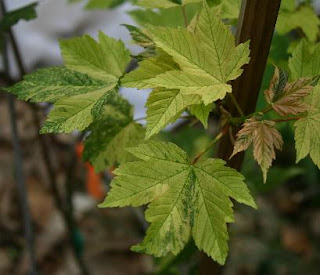 This next one is Acer pseudoplatanus nizetii. Mostly green and cream in summer, with some speckling. The undersides of the leaves has a purple variegation. 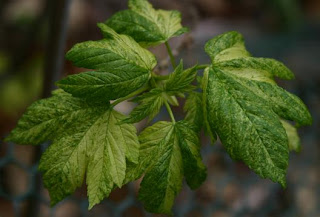 The new leaves in the spring have a lot more colors in them, mostly shades of pink 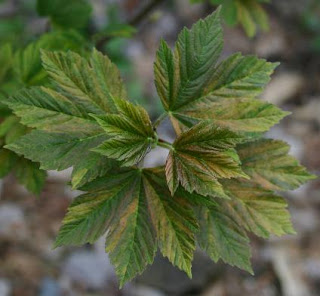 The last, the first one we grew, is Acer pseudoplatanus 'Simon Louis Freres'. This photo shows both the mature and newly emerging leaves. Again this is good down to zone 5, but I can't find anywhere just how far south these will grow. The growing notes on all of these say they will eventually reach 50 feet or so, but I doubt that I'll live long enough to see that given that in 10 years they have gone from 2 feet tall to 5 feet tall. 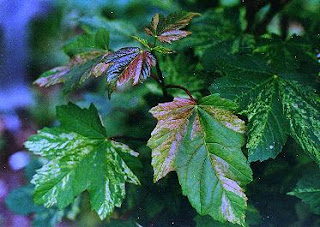 These seem to be fairly readily available, at least through mail order sources. Don't know that I've ever seen one at Lowe's or Walmart. Prices seem to be about $35 in a gallon pot. Not cheap, but not nearly as pricey as many Japanese maples.
Off later this afternoon to play the organ or piano for an Epiphany service. Another of my varied careers, recently quite dormant, but revived for just today.
Next time, the Acer shirasawanum family (finally learned to spell that without looking it up!), the fullmoon maples which are one of my favorite types.
Jane

Posted by Hoot Owl Hollow Nursery at 1:30 PM No comments: