Today is what I would call and "un-gardening" day. My own word, I guess, but I use it for when I un-do a garden. We planted a whole garden with hydrangeas a dozen years ago, maybe a little longer ago than that. They didn't bloom right away, but grew wonderfully and had become quite large. 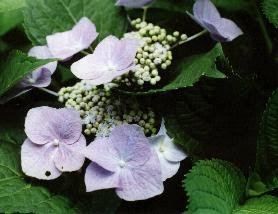 This one, Hydrangea macrophylla 'Blue Wave', is a recent acquisition, planted in another part of the garden, and it does bloom, though this photo was taken the first year and was quite blue, while this year's blooms were pink. It all depends on the pH of your soil. More acid means blue blooms. 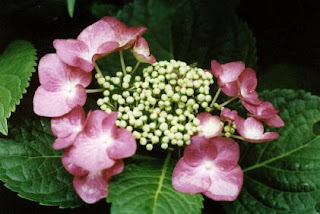 This one, Hydrangea macrophylla 'Mariesii', apparently bloomed once, though I don't remember when. I know it bloomed because I have a photo of it. I don't think it has bloomed since. 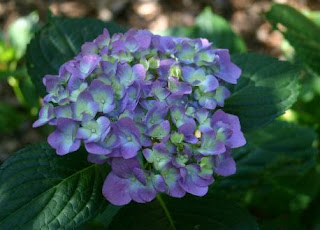 This one, Hydrangea macrophylla 'Nikko Blue', is the only one that blooms. It blooms almost every year, though it is a much smaller bush, not more than 2 feet tall - some of the others were approaching 5 feet. Maybe because it is closer to the ground, the stems on this one aren't as likely to freeze. Because it blooms, it was spared the shovel this afternoon. I potted up pieces of several of the others that had made reasonable sized offshoots and will offer them for sale in the spring to people who live in places where they will bloom.
Non-bloom in hydrangeas is usually caused by winter damage to stems. Since hydrangeas bloom on last year's stems, if they winter kill you won't have any bloom. That was the problem here. So... the hydrangea bed is gone and has been replaced by a couple of gorgeous dogwoods and will be filled in with hostas in the spring.
I honestly hate 'unplanting' things, but I've learned to think of it sort of like rearranging the furniture. If things aren't working, just move them. If they really aren't working, get rid of them. Life is too short to live with plants that aren't doing what they're supposed to be doing. There are just so many wonderful things waiting to take their place. 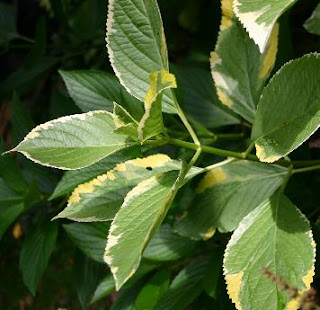 Now, the hydrangeas that I co-exist with better are those on which I don't really expect blooms. It's not that these can't or don't bloom, just that since they rarely do, you plant them for the leaves and don't worry about the rest. This first one is Hydrangea macrophylla 'Lemon Wave' which has green and white and yellow leaves, no 2 alike. 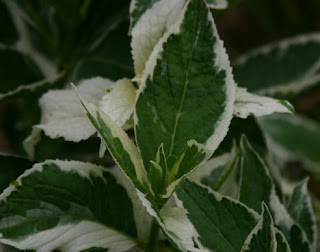 My other favorite macrophylla hydrangea is 'Wave Hill', a green a white variegated one. 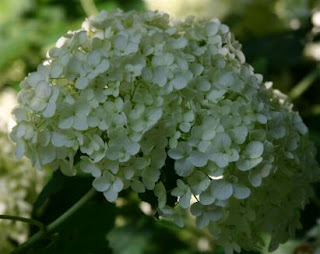 But if you really want bloom, at least in any place where the stems will freeze over the winter, skip the macrophyllas and get and Annabelle. This is a large bush that I think I've probably written about before. The blooms are large and are great for dried arrangements all winter. They go from green to white and last for quite awhile. They grow in light shade - actually prefer it, and seem to be a bit tolerant of at least minor drought.
So my compost heap has a bunch of hydrangeas and I have a redone garden. Not bad for an afternoon's work.
Jane
Posted by Hoot Owl Hollow Nursery at 6:12 PM No comments: 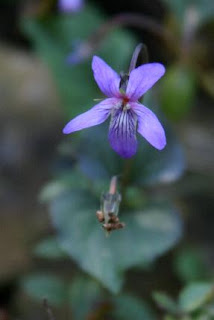 This is not an especially unusual plant, but anything that is blooming now in mid October has to be considered kind of special. Even more unusual to have a violet blooming this time of year.
Viola labradorica is also sometimes called Alpine Violet. The foliage is even tinted deep dusky violet. It is smaller than the usual wild violets and spreads by stolons sort of like a strawberry, which means that if you have one this year, you will have many next year. It also spreads by seeds. I have little colonies spread throughout the gardens and it never really would be considered invasive despite its tendencies to expand. Hardiness zones are zones 3 through 8.
Their main bloom season is in the spring, but they bloom here off and on all throughout the growing season. They will grow in sun to quite deep shade, though in the south, shade will be preferred. They prefer moist but well-drained soil. These violets will even tolerate a bit of light foot traffic, and given their diminutive size at only about 4 inches tall, they might be good between stepping stones, though I haven't tried using them in that way.
Labrador violets are native to the northern United States, eastern Canada and Greenland.
They are readily available from quite a number of mail order nurseries and aren't a bit expensive. I enjoy having them pop up here and there and should they ever get out of hand, they are very easy to thin out, unlike the other wild violets that we have here.
Jane
Posted by Hoot Owl Hollow Nursery at 9:05 PM No comments: 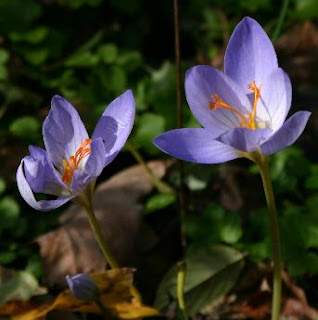 No, this picture wasn't taken last spring. These are the little known fall crocus, Crocus sativus is the one shown. There are also a number of others. This one is good down to zone 5, likes to be planted in rich, well-drained soil and to be divided occasionally. It is native to the Mediterranean. This is the crocus from which saffron is obtained. It takes the styles from 4000 flowers to make an ounce of the spice. Now you know why it is so expensive. They come up seemingly overnight, no leaves visible (they were there in the spring, I think). The blossoms close at night and on cloudy days.

The next two pictures are of another fall blooming crocus. This first is Colchicum cilicium. They have very large leaves in the spring - very un-crocus-like - and then send up many blooms in the fall. They finished blooming a week or so ago. 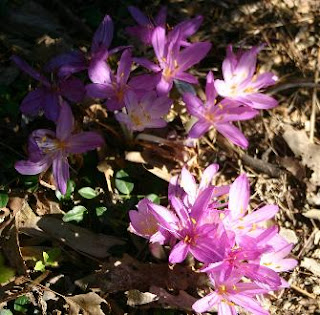 This last one is another colchicum called 'Lilac Wonder'. There are also white versions, but most you find will be some shade of pink of violet. The genus also includes some spring and summer bloomers, but I haven't grown them. Plenty of other crocuses in the spring. What I really appreciate are these fall bloomers. They like moderately fertile, not overly dry soil in sun or light shade. They also tend to appear suddenly. One day a bare spot, the next a full clump of blooms. 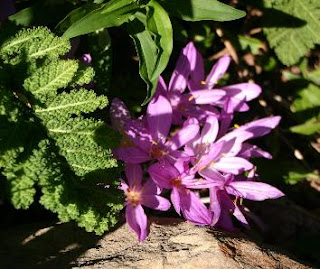 Too much to do outside this time of year - weeding, pruning, weeding, transplanting, weeding ... you get the idea.
More when I get a chance.
Jane

Posted by Hoot Owl Hollow Nursery at 6:12 PM No comments: